Gilbert Forrest Bagnani (1900-1985) was a professor of ancient history. He was born in Rome to General Ugo Bagnani and Florence Dewar. He served as a Second Lieutenant of artillery towards the end of World War I. After the War he returned to the University of Rome where he received his doctorate. Instead of entering law as he had planned, he turned to the Italian School of Archaeology in Athens to study antiquities. In 1929 Gilbert married Mary Augusta Stewart Houston (1903-1996) of Toronto, daughter of Stewart Houston (editor of "The Financial Post") and Augusta Robinson (daughter of John Beverley Robinson, Lieutenant-Governor of Ontario, and granddaughter of Sir John Beverley Robinson, Chief Justice and Attorney-General of Upper Canada). Gilbert and Stewart had an apartment in Rome and for seven seasons worked, in the Sahara Desert, with the Royal Archaeological Mission to Egypt. In 1937 they fled fascist Italy and purchased a 200 acre farm and house built around 1845 near Port Hope, Ontario and named it "Vogrie". In 1945 Gilbert was invited to teach ancient history at the University of Toronto and in 1958 became a Professor. He retired from the University of Toronto in 1965. The Bagnanis returned to "Vogrie". In the same year, Gilbert was asked to accept a term-appointment at Trent University. He was honoured with a LL.D. by Trent in 1971 and he continued to teach as a Professor of Ancient History until 1975.

James Gordon Nelson, (1932- ) was a professor at the University of Waterloo, in Waterloo, Ontario until his retirement in 1998. Nelson received his BA from McMaster University, his MA from Colorado, and his PhD from Johns Hopkins University. Before accepting a position with the University of Waterloo in 1975, Nelson held academic and administrative positions at the University of Calgary and the University of Western Ontario. He is an ecologist, a geographer, a planner, and a policy maker. James Gordon Nelson has been a member of the College of Fellows of the Royal Canadian Geographic Society, a committee member of the World Commission on Protected Areas of the International Union for Conservation of Nature and Natural Resources, a member of the National Executive Committee of the Canadian Parks and Wilderness, and Ontario's Representative on the National Board of Governors of Heritage Canada. He has received many awards, including the first Natural Heritage Award in 1978, the Canadian Association of Geographers Award for Scholarly Distinction in Geography in 1983, the Massey Medal for the Royal Canadian Geographic Society in 1983, a Certificate of Achievement from the Grand River Conservation Authority in 1994, and the 1994 Environment Award for the Regional Municipality of Waterloo. 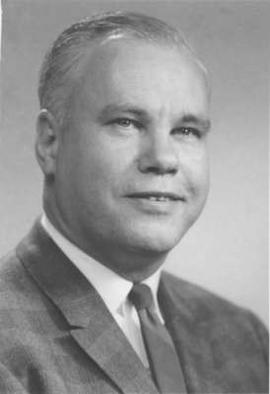 Dr. Allon Peebles was born October 20th, 1900 in New Westminster. He graduated from UBC in 1920 and had a Ph.D. in economics from Columbia. Dr. Peebles taught economics at the University of California and at Columbia had worked with a committee in the United States on the costs of medical care. A medical and labour research economist, he was chairman of B.C.’s first Health Insurance Commission in 1936 and helped fashion the later B.C. Hospital Insurance Service. The 1936 Health Insurance Act was written by Peebles and Harry Morris Cassidy. In 1941, Peebles went to Ottawa as first executive director of the Unemployment Commission and was in charge of the labour department’s research and statistics. He wrote several books on medical facilities, insurance and care. After retiring from the labour department in 1947, Allon Peebles entered private business in Chatham, Ontario. He died in Ottawa on March 13, 1962.

Henry A. Regier (1930 - ) was a professor of zoology and environmental studies at the University of Toronto until his retirement in 1995. Regier received his BA from Queen's University, a professional teaching certificate from the University of Toronto, and his PhD from Cornell University. In 1966 he joined the University of Toronto. Henry Regier's research interests include the Great Lakes, human use of aquatic systems, world population, and climate change. Regier served as a Canadian commissioner on the Great Lakes Fishery Commission, from 1980 to 1989. From 1987 to 1990 he served on the Great Lakes Science Advisory Board of the International Joint Commission of Canada and the USA. Regier has received many awards, including the Conservation Award of the Federation of Ontario Naturalists in 1980, the Centenary Medal by the Royal Society of Canada in 1986, the Award of Excellence of the American Fisheries Society in 1992, and the Lifetime Achievement Award from the International Association of Great Lakes Research in 2005.

Alexander Oberlander Potter (1897-1969) was a professor at Waterloo College (now Wilfrid Laurier University) in Waterloo, Ontario. Potter received his BA and MA from Gettysburg College, Pennsylvania, and his PhD from Columbia University. From 1923-1924 Alex Potter was an instructor at Waterloo College School. In 1924 he became the first Dean and Executive Head of the Waterloo College. A long time member of Rotary International, he served as Assistant to the President of Rotary International, Paris, France from 1937-1938. For several years he attended sessions of the League of Nations as a special observer and in 1931 represented Rotary International at the public conference on disarmament in Paris, France. In recognition of his services he was awarded the Order of St. Sava by the Yugoslavian government in 1936. During World War II, Potter worked for the Department of National War Services. After the war he returned to Waterloo College as a history professor, retiring in 1954. In 1965 Alex Potter received an honorary degree from Waterloo Lutheran University.