Lawrence Arthur Colley Panton (1894-1954) was a Canadian painter, educator and academician active in Toronto from the 1930s until his death. Born in England, he immigrated to Canada at 17. He served in the Army during 1916-1919 and studied art in the evening after his return from the war. In Toronto, he worked at Rous and Mann as a designer until 1924 when he began his teaching career, first at the Central Technical School and then at Western Technical School (1926-37), Northern Vocational School (1937-51) and finally principal of the Ontario College of Art (1951-54). In 1920 he married Marion Pye; their son Charles was born in 1921 and died in action in 1944. Panton was active in a number of organizations, including the Ontario Society of Artists (President 1931-37), the Canadian Society of Painter-Etchers and Engravers, the Canadian Group of Painters, The Royal Canadian Academy and the Arts and Letters Club (President 1953-54).

George Agnew Reid (1860-1947) was a Canadian artist, architect, educator and administrator influential in the early 20th century and instrumental in the formation of a number of important Canadian art institutions. Born in Wingham Ontario to a Scottish farm family, he studied architecture and book-keeping at his father’s insistence. In 1878 he moved to Toronto to study art. He was able to extend his art education under Thomas Eakins in Philadelphia, where he met the painter Mary Heister. In 1888 the couple travelled to Europe and studied at the Julian and Colorossi Academies, returning to Toronto in 1889. The house he designed and built in Wychwood Park was his home until the end of his life. In 1890, George Reid began reaching at the Central Ontario School of Art and Design. He eventually became principal and researched new theories of art education in the United States and Europe. Under his direction, the art school became independent of the Board of Education and moved into its own building, which he designed, in 1921. He also served as its first Principal. In 1892, George and Mary Reid built two cottages from his design at the artist colony in Onteora, New York. This led to the design of other summer homes and a small church in the Catskills community. They spent summers at this location until 1917 when the war made travel to the United States difficult. In 1921 Mary Heister Reid died, and in 1923 George Reid married Mary Wrinch, a former student and close friend of his first wife. His later life was filled with accomplishments, including the painting of murals for public spaces in Toronto City Hall, Jarvis Collegiate, the Royal Ontario Museum and elsewhere. He was instrumental in obtaining permanent funding and staff for the National Gallery in Ottawa, and was a force behind the establishment of the Art Gallery of Toronto. He was a member of the RCA, serving as President 1906-1907. He influenced a generation of students, among them C.W. Jefferys, through his teaching and created a number of works that exemplify his generation, including Forbidden Fruit, Mortgaging the Homestead, and The Foreclosure of the Mortgage.

Judith Rodger is a freelance curator and art historian based in London, Ontario. Rodger was chief curator of the London Regional Art & Historical Museum, and was personally acquainted with Greg Curnoe. She contributed the chronology and bibliography to the catalogue of the exhibition Greg Curnoe: Life and Stuff (Toronto: Art Gallery of Ontario, 2000). For a biographical sketch of Greg Curnoe, please see Greg Curnoe fonds.

Henry Sandham (1842-1910) was an illustrator and painter who lived successively in Montreal, Boston, and London, England. He was associated with the Montreal studio of William Notman, where he received his early training, later headed the art department, and was briefly a partner. Sandham produced illustrations for several leading magazines of his day, including the Century Magazine.

Helen Sanderson Sewell (1905-2001) was a Toronto artist and teacher. She attended the Ontario College of Art, graduating in 1928 with the Governor General’s Gold Medal. After graduation, she taught for six years with Arthur Lismer at the Art Gallery of Ontario and in Barrie, London, and her Toronto studio. She traveled to northern Ontario to paint with members of the Group of Seven. In 1934 she married William Sewell and interrupted her career to raise four children, including former Toronto mayor John Sewell. She resumed painting when her children were in high school, specializing in portraiture, and was active in the Toronto Heliconian Club.

Goldwin Smith (1823-1910) was a prominent journalist, academic and liberal reformer who spent the latter part of his life in Toronto. Born in Reading, England, he was educated at Eton College and Oxford University, and was the Regius Professor of History at Oxford from 1858 to 1866. Smith began to publish widely on history and political reform. He moved to the United States in 1868, and taught briefly at Cornell University, to which he retained a connection for the rest of his life. He moved to Toronto in 1871, and married Harriet Elizabeth Mann (née Dixon) the widow of William Henry Boulton, in 1875. Smith thus became master of the Grange house and estate in central Toronto, and became a pillar of Toronto society. His journalistic career included a brief employment at the Globe, after which he joined independent publishing ventures including the Canadian Monthly and National Review and the Evening Telegram. He then published his own journal, the Bystander, sporadically between 1879 and 1890. Smith also published widely in other local and international news journals. He took part in important civic and educational reform initiatives, including serving on the new board of the University of Toronto. The Grange remained his wife's property and was willed by her to the city of Toronto to serve as a public art gallery, later becoming the first home of the Art Gallery of Ontario.

Michael James Aleck Snow (1929- ) is a Canadian painter, sculptor, filmmaker, photographer and musician. He was born in Toronto and educated at Upper Canada College and subsequently at the Ontario College of Art (1948-1952). After travels in Europe (1953-54) he worked for Graphic Films in Toronto (1955-56), producing his first independent film, A-Z. His first solo exhibition as a painter was at the Greenwich Gallery in Toronto in 1956. Between 1961 and 1967, mostly while living in New York, Snow produced work in the Pop-art mode based on the silhouette of a young woman, entitled Walking Woman, probably his most widely recognized creation. A series of 11 stainless steel sculptures of the image was created for the Ontario pavilion at Expo 67 and is now in the collection of the Art Gallery of Ontario. After moving to New York in 1964, he made films regarded as Minimalist, such as New York Ear and Eye Control (1964) and Wavelength (1966-67). Returning to Toronto in 1972, Snow worked mainly on cinematic and photographic projects including ‘Rameau’s Nephew’ by Diderot (Thanx to Dennis Young) by Wilma Schoen. His work is concerned with the nature of media themselves, with perception and with the interrelation of language, sound and meaning. Snow has been the subject of exhibitions and retrospectives in Toronto, Vancouver and Paris. 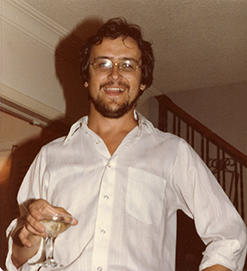 The Tovell family of Toronto, in particular Harold Murchison Tovell (1887-1947), Ruth Massey Tovell (1889-1961) and their son Vincent Massey Tovell (b. 1922), was active in art circles in Toronto for several decades following the First World War. Harold Tovell and Ruth Massey married in 1910 and in 1913-1914 travelled in Europe, visiting the major art galleries. Returning to Toronto, they lived on the eastern edge of the city in Dentonia Park, the Massey estate, until 1936 when they moved to the city centre. The Tovells built a collection of works by Canadian and European artists. In France in 1926 they met French painter Marcel Duchamp (1887-1968) through their friend American author and artist Walter Pach (1883-1958). In 1928 they purchased a painting by Duchamp’s older half-brother Jacques Villon (1875-1963) at an exhibition in New York. They met Jacques and Gaby Villon in Paris in 1930 and corresponded with them until the 1960s. The Villons befriended Vincent who visited them in France in the years before the Second World War. From 1941 to 1947, the Tovells lived near Port Hope, Ontario. After her husband’s death, Mrs Tovell returned to live in Toronto. Harold and Ruth Tovell had three other sons: Walter (b. 1916), a geologist and Director of the Royal Ontario Museum 1972-1975, Freeman (b. 1918), diplomat and historian, and Harold (1919-2002), a physician. They bequeathed many of their artworks to the Royal Ontario Museum, the National Gallery of Canada and the Art Gallery of Ontario.