15 Results for Business and commerce

File consists of Muirheads' correspondence including a memo and a fax.

One photocopy of a fax, dated December 4, 1991, to Wendy Watson of MCTV from Alan Querney of Muirheads. Attached to the fax are photocopies of a newspaper clipping ("Scottish Sailor opened store 100 years ago" by Harold Carmichael, The ...

File consists of a colour, one page computer printout Grand Opening invitation for Querney's Office Plus. The date of the Grand Opening was listed as Thursday, October 21 2010 from 3 to 7pm at 67 Elm Street, Sudbury, Ontario. RSVP's re...

Series consists of records the Querney family kept of Muirheads after selling the company to Grand & Toy, an OfficeMax company.

Fonds consists of one price list for O'Flynn Cash Grocery. 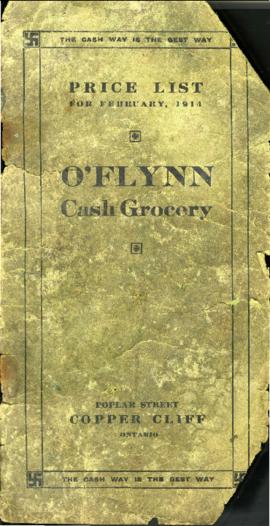 Item is an annotated price list printed for O'Flynn Cash Grocery by Sudbury Star Print. Inside the volume are price lists for household items and foodstuffs. Household items include brooms, soaps and powders, polishes and starches. Foodstu...

File consists of a press release concerning the purchase of Muirheads by Grand & Toy, an OfficeMax company.