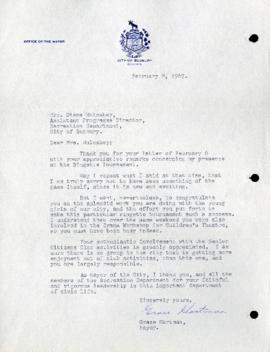 Diana Joyce Heit was born January 3, 1941 in Sudbury, Ontario. The eldest of Jacob and Katherine Heit's five children, Diana was raised in Garson, Ontario. She attended St. John's Separate School in Garson and often went to Falcona Camp, run by Falconbridge Mine in the summer. Diana Heit married Lawrence Thomas Mulcahey on September 5, 1964 at St. John's Church in Garson. She later became the Assistant Programme Director for the Recreation Department of the City of Sudbury. With this position, Mulcahey assisted with the creation of the game ringette. She designed the crests for the local team tournaments and organized the first games.