Item is a picture of the inside of a factory, machinery, and a worker.

Item is a picture of a factory complex and mill stream. 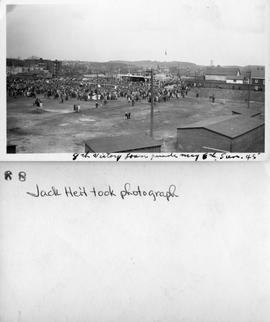 One annotated photograph of a large crowd gathered at Queen's Athletic Field on Victory in Europe Day. Approximately 10,000 attended the commemorative service which began at 4pm but, due to high winds, only a little over 4,000 people were st...

Fonds consists of drawings, watercolours and designs of A. H. Howard produced in Toronto between 1880 and 1914, especially in the sketchbooks in which Howard drew Ontario landscapes and towns, flowers, trees, human figures, factory interiors and o...

The collection consists of material related to environmental issues in the Elmira area, largely compiled by APT Environment, a watchdog of Uniroyal Chemical (now Chemtura Canada Company). Fonds is comprised of the following series: Uniroyal histor...

The fonds consists of copies of four hand-written (and transcribed) letters Aaron Moulton wrote to his wife and children during the year he spent in the Yukon's Klondike from 1897-1898. Also included is a list of people mentioned in Aaron Mou...

The fonds contains course notes, student papers, examination questions, and other material created and accumulated by Alex Potter during his years as a faculty member at Waterloo College (now Wilfrid Laurier University).