Series consists of a ceramic depiction of a church inscribed with the word: Alajärvi (This is a depiction of the church in Alajärvi, Finland where Eeva Annikki Kantokoski was baptized in 1924.); an annotated pocket-sized "New Testament of Our Lord and Saviour Jesus Christ Translated out of the Original Greek and with the Former Translations Diligently Compared and Revised by his Majesty's Special Command," published in London by Collins' Clear-Type Press in 1936 (This pocket-sized bible was a gift given to Ann Koski on the occasion of her confirmation by her Confirmation Teacher pastor [Mathew H. Lepisto], and is signed by him); and a book entitled: "Jane Withers Twentieth-Century Fox Film Star - Her Life Story," published in Racine, Wisconsin by Whitman Publishing Company, 1936 (The inside cover of the book is annotated and reads: Christmas 1936 to Anne Koski From Veikko Koski).

Series consists of a memo, a photocopy of a photograph, photocopies of letters, sections of books, articles, and typed and handwritten notes created by Kelly while working on his assigned chapter in Sudbury Rail Town to Regional Capital.

Series consists of passports, tickets, and landing cards, pertaining to Matti Kantokoski's military service, and the immigration of the Kantokoski/Koski family to Canada. 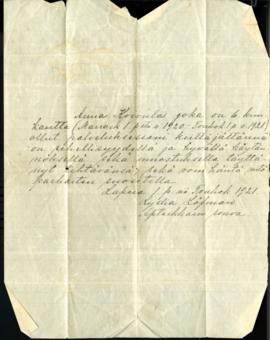 Series consists of two handwritten reference letters; one for Anna Koivula (Kantokoski/Koski) and one for her daughter Ann Chisholm (Ann Eva Kantokoski/Koski). The reference letter for Anna Koivula (born 1903) was written by Lydia Lofman, a pharmacist's wife, in Lapua Finland, dated May 1, 1921, regarding work in a kitchen, while the reference letter for Ann Chisholm (nee Koski, born 1924) was written by Mrs. J. Ferrier from Sudbury, Ontario, dated June 14, 1942 concerning her job doing housework.