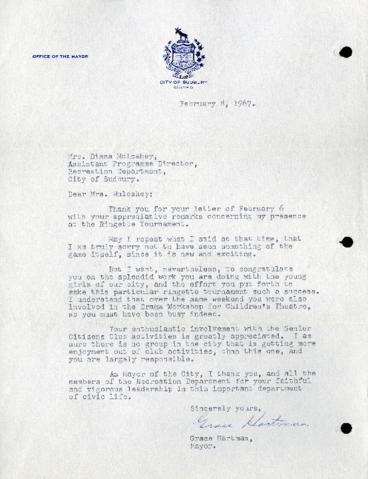 One letter addressed to Mrs. Diana Mulcahey, Assistant Programme Director, Recreation Department, City of Sudbury, from Mayor Grace Hartman, dated February 8, 1967. The letter was a reply to a letter sent by Mulcahey on February 6, 1967 concerning a Ringette Tournament the mayor attended. Hartman, in this letter, congratulated Mulcahey on her work with youth, the elderly, and the success of the ringette tournament. The city crest is included in the protocol section of the letter.

The original letter is held by Diana Mulcahey.

Scan and photocopy available of the letter. The original letter is held by Diana Mulcahey.