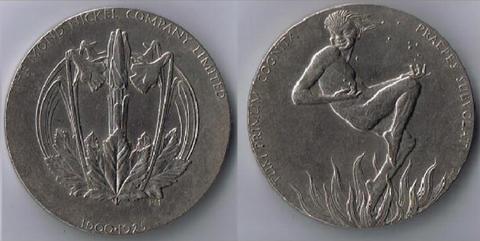 The Mond Nickel Company Limited was a United Kingdom-based mining company, formed on September 20, 1900, licensed in Canada to carry on business in the province of Ontario, from October 16, 1900. The firm was founded by Ludwig Mond (1839-1909) to process Canadian ore from mines near Sudbury, which were then shipped to Mond's works in Britain for final purification.

The first of Mond's Canadian mining properties located in Denison Township, was purchased from Ricardo McConnell and associates in 1899. this site renamed the Victoria Mine began development in 1900. About the same time, Mond's refinery at Clydach, near Swansea, Wales, was being erected.

Around the same time, Mond purchased from McConnell, second mining location the Garson Mine which was developed later on, in Garson Township.

In 1911 the Mond company began construction of a new smelter at Coniston, Ontario. In that year, the company purchased the mining rights at Frood Extension about 8 miles from Coniston, though no serious development took place at this location until the 1920s. By 1928 INCO began development of its Frood Mine, when it was determined that it and Mond's Frood Extension were part of the same ore body, Alfred Mond negotiated an agreement pursuant to which in 1929 the interests of the Mond Nickel Company were merged into the International Nickel Company through the issue of the latter's stock in exchange for the outstanding stock of Mond.