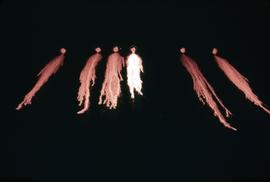 The fonds consists of textual materials and photographs. The textual material consists of a small number of original documents such as a hand-written letter from Mrs. Jane A. Whatmough to her daughter, Annie Louise Gallagher, dated 1904, wedding i...

Series consists of one annotated photocopy of a computer printout of the Koivula family tree, beginning with Henrik Jakobsson Koivula; a photocopy of a handwritten family tree concerning descendants of Susanna Sanna Johansdotter Saarela Koivula; a...